How to begin?  How do I start telling a story that, for me, never had a beginning?   I am a novel, both still being written, and also missing the first several chapters.  I am adopted.  “Late Discovery Adoptee” as the term goes, and at the start of my search.

I suppose "late discovery" is not entirely correct.  Perhaps "late confirmation" is better. Because I always knew that I was different, that my origins were a secret. But I was never told.  Growing up, I learned  that "Where I Came From" was a topic that immediately made my parents uncomfortable and prompted evasions and changes of subject. The word adoption was not spoken.

As a result, I had always despised conversations with strangers about ethnic heritage:  “So… Kevin, what are you?”  My answer was canned and practiced… “I’m part Slovak on my Dad’s side, Lithuanian and a bunch of other things on my mother’s.   I’m kind of a mutt, really...”

If you asked me this question, my voice would waver, and my eyes would not meet yours.   I would say my rehearsed lines, but I would know that I had no place in the conversation.  And I would quickly change the subject.

The evidence was all around, but none more compelling than the obvious fact that I do not resemble my parents. One look at any family photo will confirm this.  All my life I have heard comments like, "Wow.  You don't look anything like them."  I would say, "Yeah... I guess I take after my mom more than my dad."   And that seemed to work.  If we were cast in a movie together, my mother and I could pass as related.  But only if you decided to believe it was true.

I first got up the courage to broach the subject with my mother when Dad was in one of his many hospital visits.  It was difficult talking to the two of them honestly about anything when they were together.  But alone, one-on-one, some of the guard would sometimes go down.     We were having a heart to heart... she was telling me stories from her own childhood, and I finally asked  if she could just tell me the truth:  Am I adopted?

She froze.  Her face blanched in panic and her eyes widened.  It was a reaction I would come to understand only years later.  She collapsed on the couch and just kept asking: “Why would you say that?  Why would you ask that?”    I told her about the photos, the lack of any evidence that she had ever been pregnant with either me or my sister, the comments we heard as children from kids that lived down the street… the feeling of always having known.

“You’ve seen your birth certificate,”  she said, clutching desperately at the one thing she knew.  “It’s all there.”

Yes.  My Birth Certificate:  A sheet of paper, with a government seal, that said Norman and Patricia Gladish were my biological parents.   It was a forgery.  What I later learned was that, in Ohio as in many other states, adopted children were issued  an “amended” birth certificate, while the original document listing the birth mother was sealed by law from everyone, including the adoptee.

See how official it looks?  How real?  This sheet of paper was the counterfeit currency of my identity for 43 years. 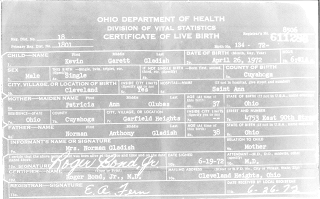 My mother finally said “When your father gets home from the hospital, we’ll sit down and talk about all this.”  And that was that.  But it was all that I needed to know the truth.   Dad would continue to get sick. And it was important to not upset him.  So the subject would once again fade from relevance in my mind.

Three years later, I finally asked my him.  I was 40 years old by then, hoping that he and I could finally have an honest talk, man to man. I wanted to tell him that it didn't matter, that he would always be the father who raised me and that I would always love him.  I just wanted to know the truth, and more importantly, hear the truth from his lips.

“Am I adopted?” I asked, looking him in the eye.
“No” he said, not looking in mine.
And that was that.

Dad passed away a year and a half ago, so we will never have the talk that we could have had that day.  Mom is in assisted living with dementia. I know she did her best to tell me, but she couldn't.  He wouldn't let her.

That moment with my father angers me still and breaks my heart.  Because I know he loved me.  I know he always wanted what was best for me. He encouraged me to follow my dreams, gave me opportunities and life lessons that I will forever be grateful for.  None of that has changed.  But there will always be a part of my relationship with him that I will remember as false - as inauthentic as the amended birth certificate presented to me.  I tried to open the door to something genuine between us.  But he slammed it shut.

Forgiveness is down the road for me, if I am to find happiness and heal. I know this.  But I'm not quite there yet. The best I can do now, is to try my best to live the lesson of that moment in my own life -  to never let a lie come between me and the ones I love.

My parents were 37 and 39 when I came into the world, an uncommon late age for two devout Catholics to have children in the early 70’s.  They had been married for 14 years.  When I asked my father why it took so long, he said that Mom had trouble conceiving, but that they found a Very Special Doctor who was able to help.  And then she had me.  I listened to his story, knowing it was a lie, and I pretended to  accept it.  Why?  Because it was easier, I guess.  Because it was what I'd always done. If I have to forgive him for lying, I have to forgive myself, too, for collaborating.  Like all the stories Dad told, though, it was such a pleasant one to believe...

And so it came to be that I was conceived by magic, my origins written in a fairy tale.

Once upon a time, there was a man and a woman  who desperately wanted children but couldn’t conceive.  After fourteen years, they began to lose hope.  But then, they met a Very Special Doctor… a magic doctor who could give them a child.   But the price was secrecy.  For if the child ever found out, the spell would be broken…

And so I would be brought into this world as a secret, my history known to others, but not to myself.  Though that secret would be something I would feel my whole life, I was never to speak of it or ask questions, for fear of breaking the spell that would break their hearts - the illusion that my adoptive parents so desperately needed to believe - that I was theirs and theirs alone.

I learned to live a pretend life as a pretend person, pretending to be someone I called Me.

Until now.  Because this year, through a series of events I will go into later, I applied to see my real birth certificate.  After more than 50 years, and through the tireless efforts of a woman named Betsie Norris and her group, The Adoption Network, the birth records for adoptees in Ohio were unsealed on March 20, 2015.  The histories and identities that have been held hostage from so many of us (400,000 records in all) are now free.

And so my journey to becoming my real self began when my original birth certificate arrived in the mail on May 26.   I cannot describe the feeling that came over me as I opened the envelope and held the document in my hand. The spell was finally broken.

There is so much more to come. And I will continue to chronicle this journey as best I can.   But for now, you can feel free to ask me about my origins and ethnicity.  Go ahead.  I don’t mind anymore. I don't know the full story of my ancestry yet, but I will tell you my story as I learn it.   I will write new chapters and do my best to uncover the missing ones.

I will tell you that I am adopted.

I will speak those words, and they will be the truth.

And I will look you in the eye as I say it.

Other Adoption Blogs, Videos, and Sites I Visit

Kevin Gladish
I was born, adopted, and raised in Cleveland, OH. I'm a late discovery adoptee who is searching for my birth family and writing about the journey. I live in Chicago where I perform in plays and tell stories. Thanks for stopping by.